A mysterious and étrange artist of Greek-American origins, who was born in Florida, lived in

Detroit, moved to Brussels and performs under an Italian alias … His latest album – a double LP – carries the name of a French philosopher’s book. Four chapters of beautiful music which might unconsciously bring back here and there bits of riffs you may think you recognize from your experience as a music aficionado (Secret Chief 3, Mark Lanegan, Mike Patton …). But these prove to be just random neural connections; there is no place for confusion here: with such spatial background and artistic sensitivity, Georgio 'the Dove' Valentino is one of a kind.

One should not be discouraged by the length of the record – Valentino’s style is pure invitation of diving into a world where the time stops.  Not the kind of music to put on your mp3 player either. Vinyl is the only choice as changing the records is the only temporal segmentation of the audition.

“The reality gets to people who've never seen it up close.”

Face A of the first disc is called “Georgio 'the Dove' Valentino &amp; la Société des Mélancoliques”. Although I believe that any of the 4 LP sides may be listened to independently of one another, this first side is particularly good to start with because it quenching a curiosity: where Tuxedomoon and La Société des Mélancoliques intersect each other. It contains also all the distinctive elements that gives the album a delicate dark specificity: Valentino’s velvety voice and guitar, the hypnotic bass of Patrizia F., Blaine L. Reininger’s violin and Luc van Lieshout’s trumpet. There is a strong cinematographic flavor on this side of the disc. “I Wish We Were Insects” is evoking swarms behavior and has a devilish science-fiction preaching at the end.  “Don’t Do Me Any Favours” brings in the perspective of a classic psychological thriller, through a combination between the sound of the 60s’, movie speeches and threatening lyrics. Nevertheless, “The Gift of Fury” and “Mille Plateaux” reach the same effect just instrumentally.

The second side – FACE 2 - "I Won't Betray You" (Hommage à Chuck Berry) – is definitely nothing one might expect from a track called Hommage à Chuck Berry.  It’s a sexy and deranged love song, twice orgasmic within its 17 minutes length. Inspired by a true story, it captures the twisted blessed feeling which can exist behind socially unaccepted fascinations. A beautiful undertaking of explaining the instinctive irresistibleness.

“I could unfold my wings, I'd be a frightening beast”

– retakes two songs featured on first LP: the record’s opening track “I Wish We Were Insects” and the album title track “Mille Plateaux”, but in unique interpretations, as improvised variations.  Even more amazing is “Nietzschean Love Theme” which presents itself as a melancholic attempt of healing from a broken heart and building hope of recovery. Except for the very suggestive ending… “Washed-Out World” is probably, musically speaking, the most cheerful track of the entire record, a romantic repetitive guitar ballad, but it has its shadows in the lyrics. “Bête Noire” starts as a lyrical invitation to introspection and breaks away in a fanfare flourish.

– is Valentino’s Mondo Cane but without the glamour, orchestras or choirs. It wouldn’t hurt listening to the original versions beforehand, for maximum effect and surprise. Valentino’s musical arrangements are unexpected and delightful, a true avant-garde transformation.

There is probably at least one concept hidden beyond each song. Each new audition brings along new understandings, more nuances, richer, deeper and clearer than the previous. If you plan falling in love with a fine piece of art, here it’s your record. All you need to do is finding a Sunday afternoon. The rest has been exquisitely taken care of. 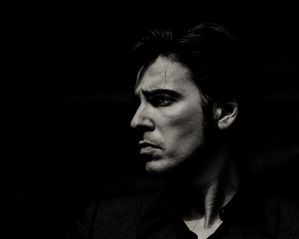 Recorded at various locations in Belgium, France, the Netherlands, Scotland and the United States